Our websites use the analysis software Matomo for the statistical evaluation of visitor access.
Ok Learn more

From September 23, 2021 to September 25, 2022 we are showing the best known archaeological monument in Europe. Visitors can embark on a journey through space and time. They will experience the dimensions of this imposing stone circle from close up with detailed full-sized replicas and move through analogically and virtually reconstructed landscapes, combined with selected finds from English archaeology and Westphalian LWL-archaeology. Together with the Ludwig Boltzmann Institute for Archaeological Prospection and Virtual Archaeology (LBI ArchPro) we can present the latest research results on the history of the stone circle and the surrounding landscape.

Stonehenge is the monumental pinnacle of prehistoric construction and engineering work, but Stonehenge does not exist in isolation. It is part of a ritual landscape with thousands of years of history and parallels throughout Europe that are tangible even within our region. The exhibition focusses for the first time on the shaping of this cultural landscape by humans and contrasts it with contemporaneous developments in Westphalia and the Ruhr District. Because here, too, over 4,500 years ago, and in some cases even earlier than in southern England, megalithic (mega = large, lithos = stone) structures were built that served as social meeting points in a landscape that was increasingly shaped by humans.

Using modern display methods and virtual reconstructions, the exhibition tells the story of Stonehenge and its role in a uniquely preserved prehistoric landscape and sets it in relation to the great contemporary developments in Westphalia. Detailed replicas, VR technology, 3D models, graphics and multimedia installations take visitors on a multimedia and interactive journey through time and landscapes. The visitors start at the warm spring of Blick Mead around 8,000 years ago and journey past numerous monuments on Salisbury Plain right into the middle of Stonehenge.

You will experience the dimensions of the imposing stone circle close up with the help of full-size and exact replicas while you watch an expansive projection film showing how the stones, which are up to seven meters high, were erected and put into place. The journey continues through the Bronze Age to the Modern Age, where places like Stonehenge still serve as social meeting places and orientation points. 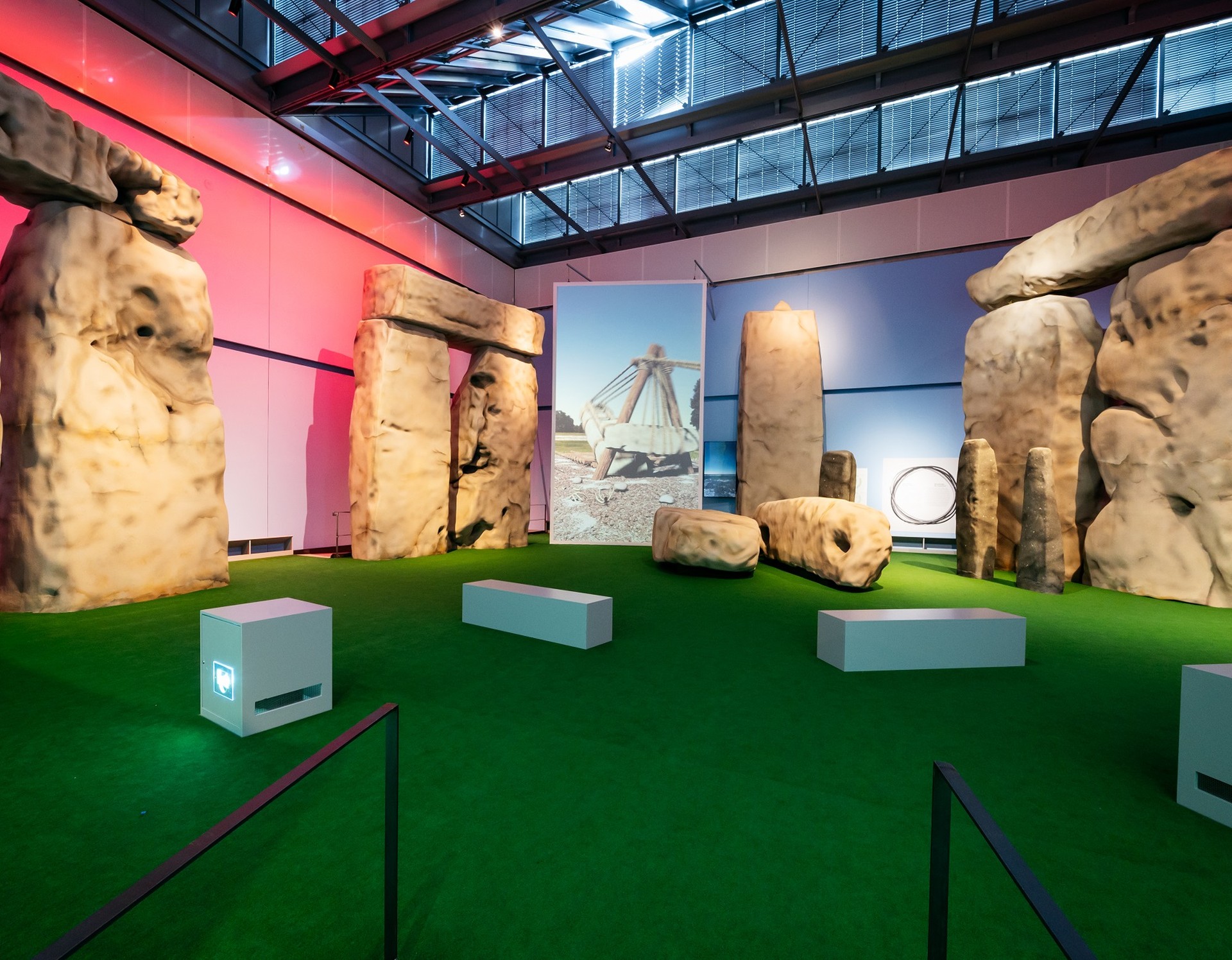 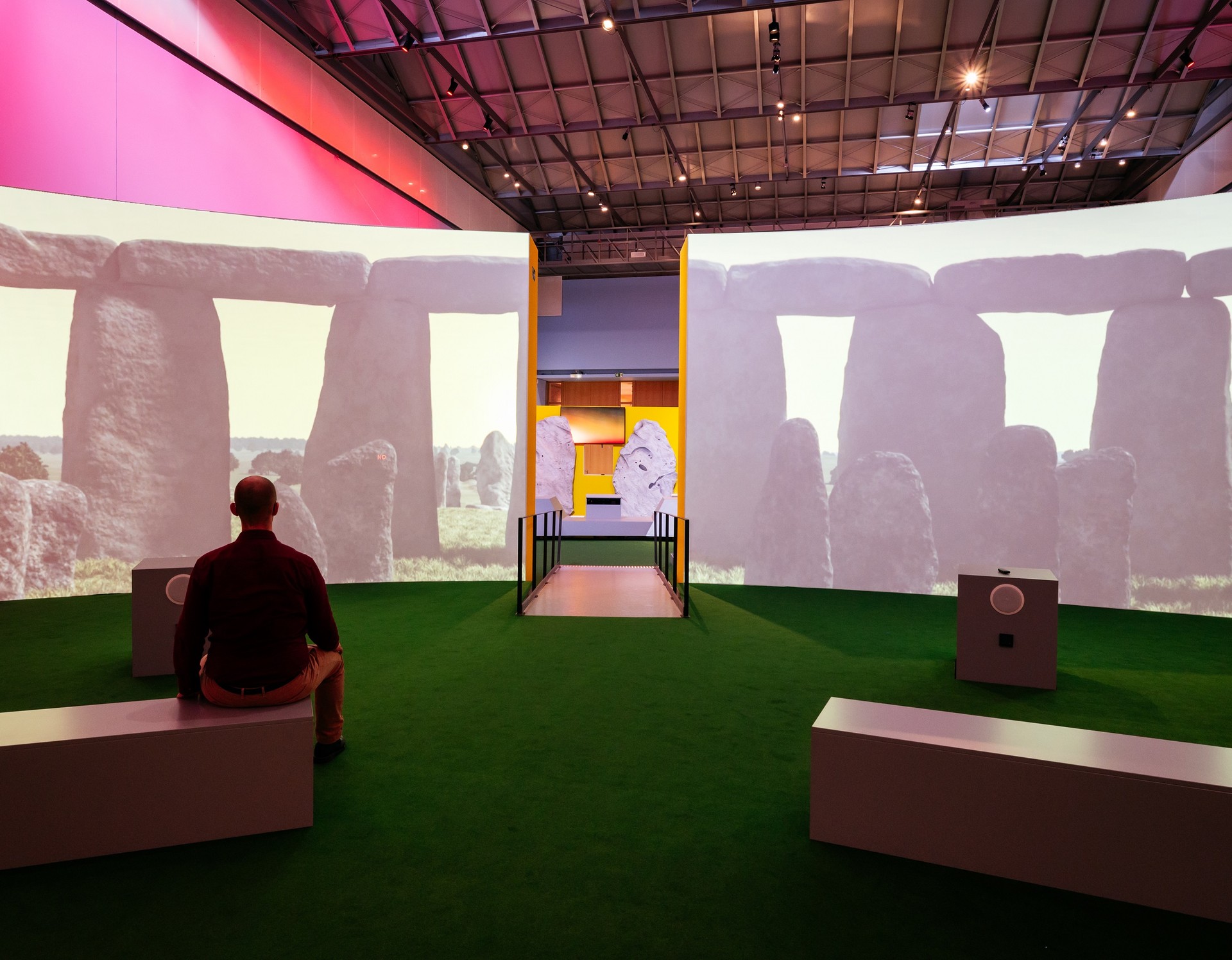 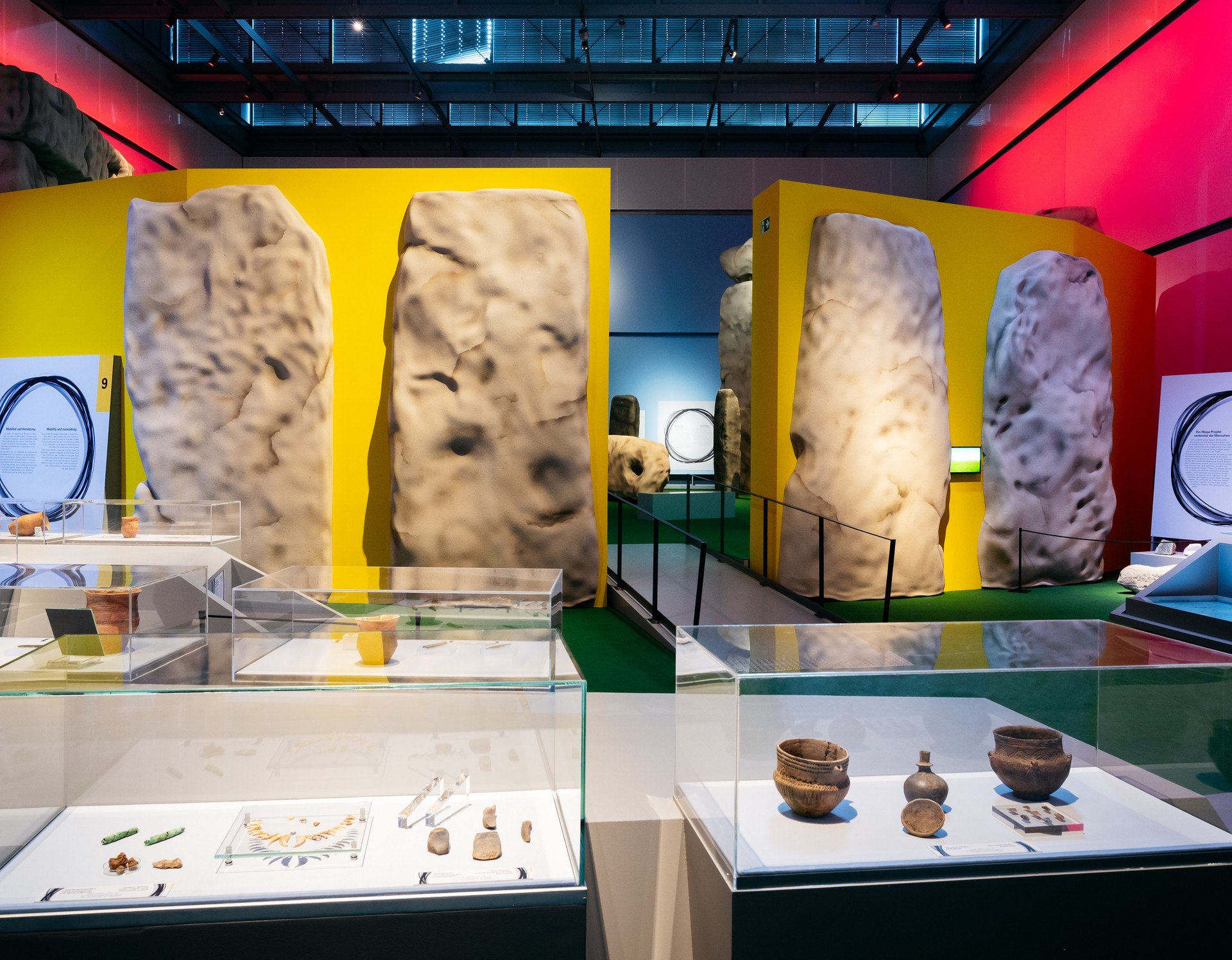 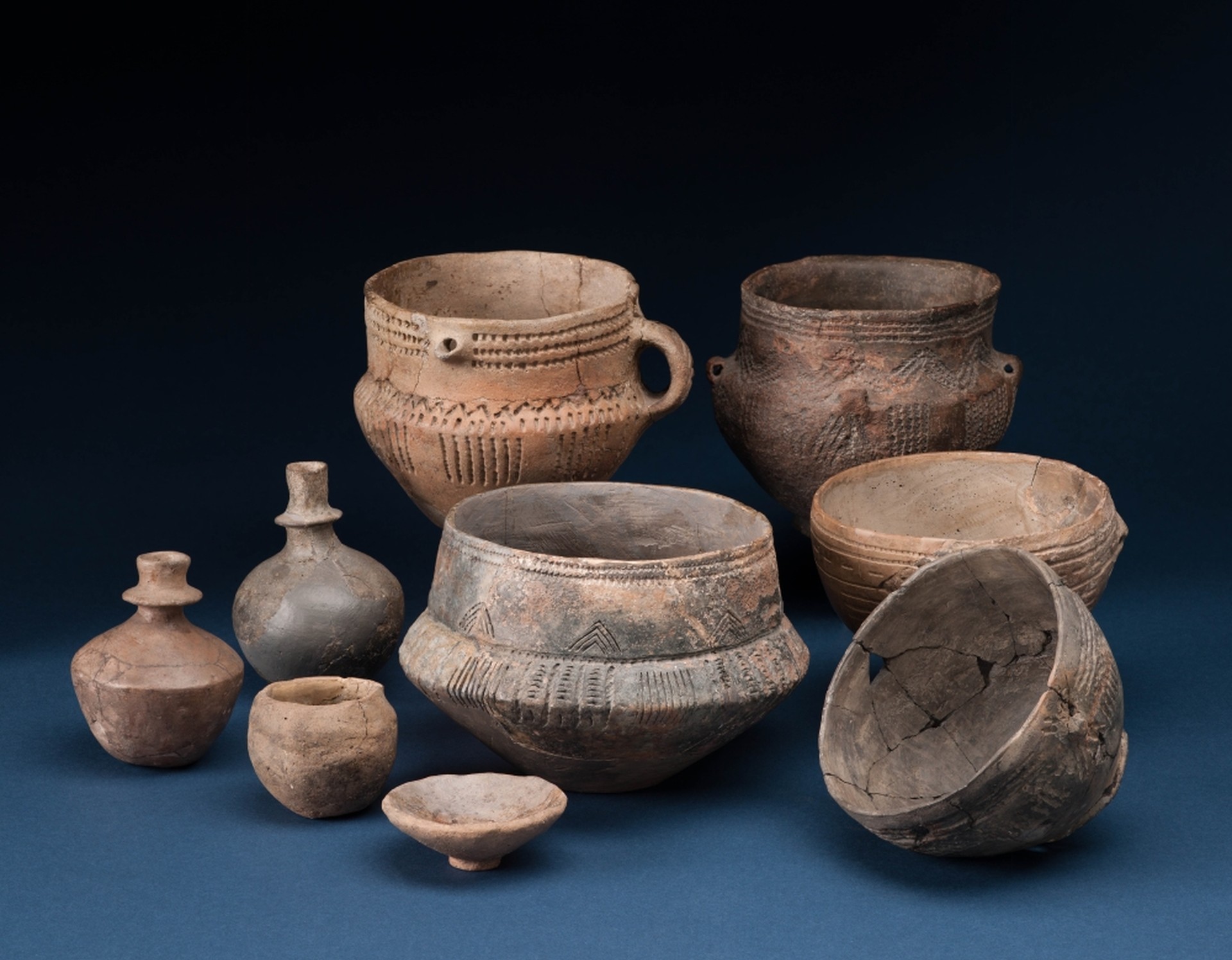 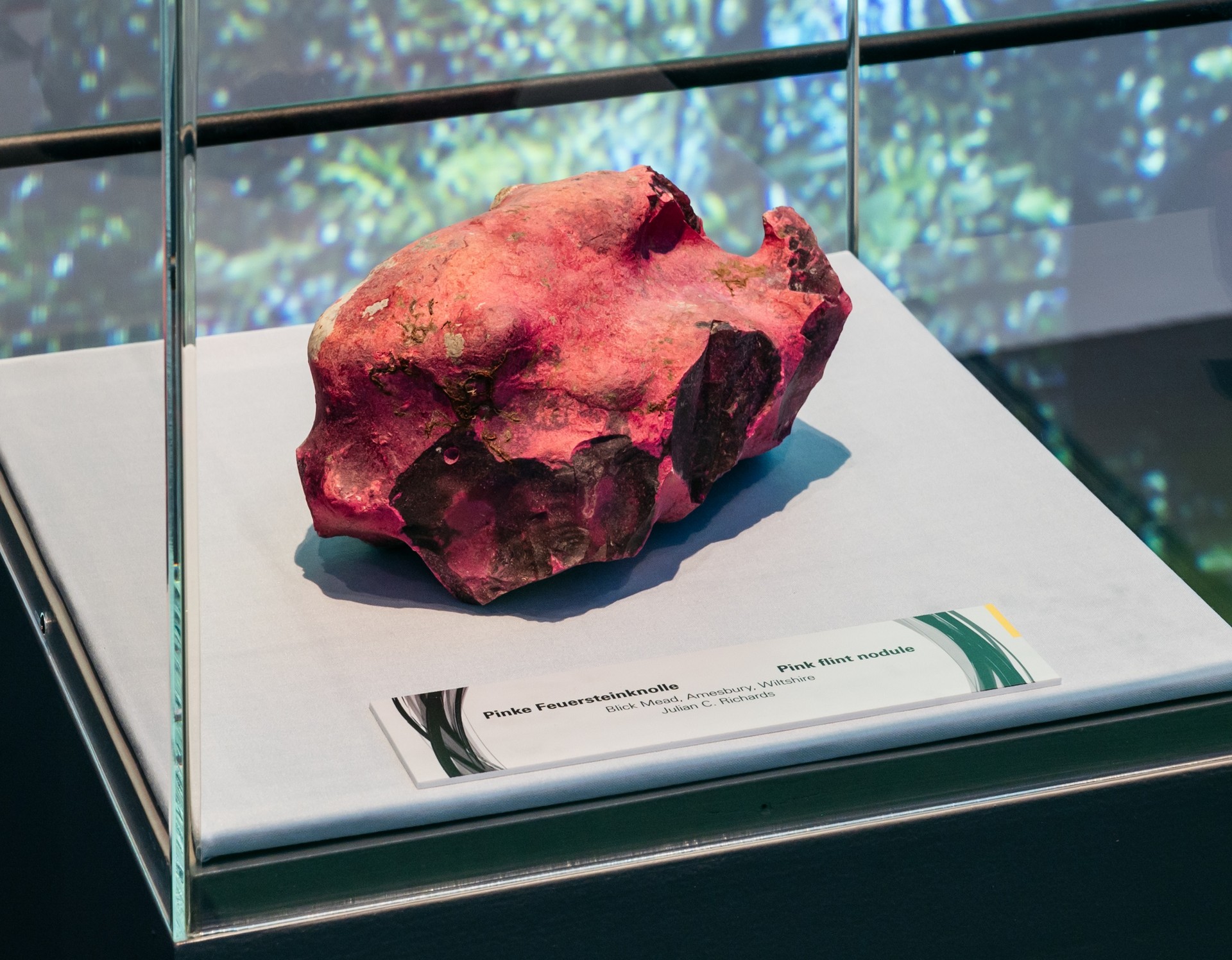 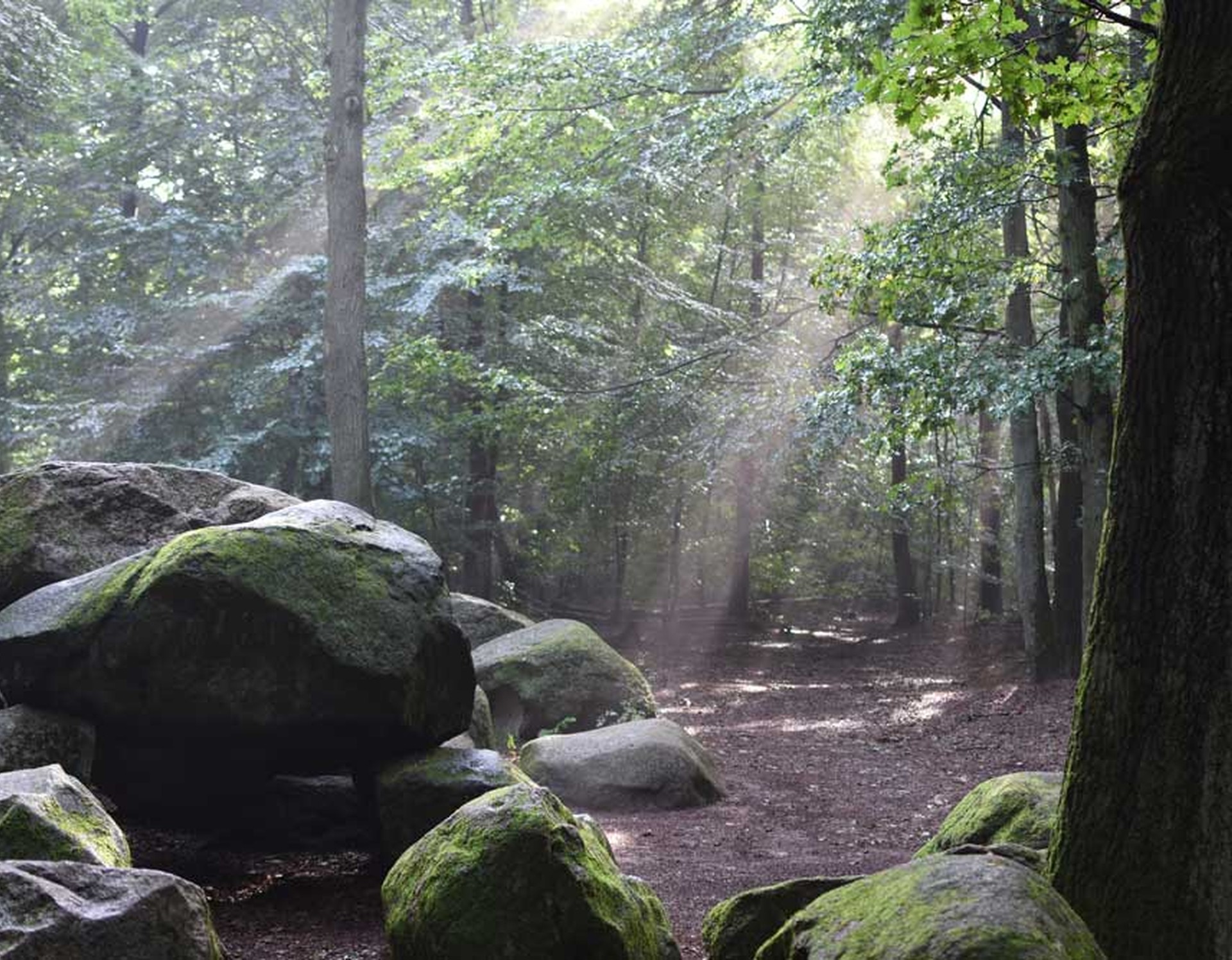 What can visitors expect to see on 1,000 square meters of exhibition space?

The exhibition is divided into 16 thematic areas, ranging from Westphalian megalithic graves to monuments in the landscape around Stonehenge to elite Bronze Age burials in England and Westphalia. More than 230 archaeological and cultural-historical exhibits are on display, including loans from the Dorset Museum, the Wiltshire Museum, the Salisbury Museum, and the Museum of Prehistory and Protohistory in Berlin. In addition there are also 25 media stations (projections, films, VR applications, audio stations, etc.) and 5 landscape models or reconstructions.

The smallest object
The golden decorative pins from the wooden handle of a dagger belonging to the so-called Bush Barrow Man are 0.2 mm wide and 1.0 mm long. More than 1,000 decorative pins per cm² were used in the handle of the dagger.
Location of find: Burial mound in Wiltshire. Dating: Early Bronze Age (around 1950 BC)
Lender: Wiltshire Museum

The oldest object
Microliths (very small Stone Age blades or tips of up to 3 cm in size) and aurochs bones date from the Mesolithic Age (8th to 5th millennium BC). They were found at Blick Mead's warm spring in Wiltshire.
Lender: University of Buckingham, D. C. Reid

The most valuable object
The so-called “Mere Sun Disc” is made of gold and was found in Mere, Wiltshire. It dates from the Copper Age or the Early Bronze Age (around 2450/2400 to 2300 BC).
Lender: Wiltshire Museum

The most curious object
A pink flint from Blick Mead. The flints become covered with a rare red algae in the warm spring at Blick Mead. When exposed to the air, the algae dry and the rock turns bright pink.
Lender: Julian Richards

Contemporary Arts
The British artist and Turner Prize winner (2004) Jeremy Deller was artistically interested in Stonehenge. He created “Sacrilege”, a Stonehenge bouncy castle in original format and is quoted as saying about the project: "I just wanted to make the most stupid artwork ever made." Film material about “Sacrilege” can be viewed at the exhibition together with other contemporary artworks by Jeremy Deller on the subject of Stonehenge.

Your browser is out-of-date!